If you have been following along the blog series, you’ve seen in Part 1 why blockchain matters and in Part2 how we can build a shopping cart in ReactJs that will be used in this part to send our transactions to the blockchain. In this part, we will see the blockchain plumbing and setup.

Audience: If you are functional consultant or an architect who wants to understand how blockchain transactions work (at a high level). I have explained them in the Blockchain Request Lifecycle section. If you are developer who would like to build something similar, I have also posted the source code of my working prototype that demonstrates how Dynamics can be linked to the blockchain. I have never heard of blockchain in Dynamics365 space, so potentially this the first ever working prototype with source code – hooray!!

There are few blockchains in the market but the two biggest of them are Bitcoin’s blockchain and Ethereum Foundation blockchain. We will be using the Ethereum Foundation one because as per my research it is growing faster and has recently tied-up with Microsoft for a Blockchain As A Service solution. So knowing how to integrate with it will help you understand the underpinnings of that service.

I like to start from the grassroots and make my way up the chain. That way I can understand how connectivity works, dependencies, install order, etc. This is a difficult path because you need to install the packages one by one – in a particular sequence whereas on the Service they are all pre-installed and you get a working infrastructure. So I will leave it upto you, either way you get a blockchain and following is what its eco system is composed of.

The stack I used for Blockchain development

Let me try to explain how the Dynamics to Blockchain connectivity works. 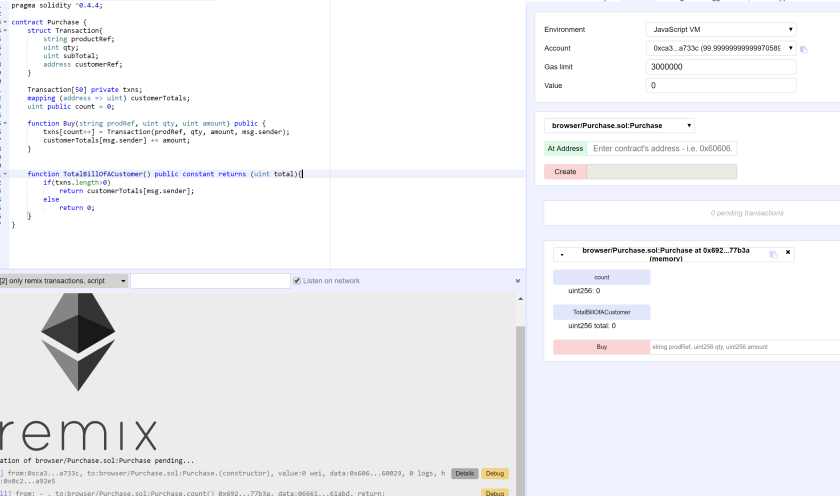 TotalBillOfACustomer – total bill of the customer

You will have to install the npm packages and get the webpack running in your local machine for the dependencies to resolve. It is not going to be a unzip, deploy and run type of application. As explained earlier there a lot of underpinnings / dependencies tools that are being used. Follow the trail starting from the packages.json file.

One thought on “Part 3 – Connecting Dynamics with Blockchain”

Manny Grewal is based in Australia and loves to play with modern technology paradigms. Mainly Artificial Intelligence, Blockchain, Computer Vision and Dynamics. If you like these fields then go through blog, as there is lot of information.